David Latham as Wally and Sharon Clancy as the Evil Queen

written by Maeve Ingoldsby and Cheech Maguire, with musical direction by Peter Beckett

This year’s Gaiety Panto was seen by over 75,000 people, was performed 78 times and was judged to be the most successful panto since 2005.  The run was extended due to popular demand by a week. 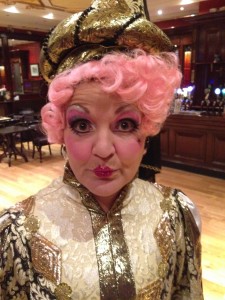 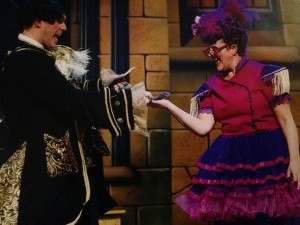 If a theatre has been staging pantomimes for nearly 150 years, you imagine it knows what it’s doing.  And when it comes to Christmas pantos the peopt the Gaiety really know what they’re doing.

Yet again they’ve come up with the goods in this entertaining and funny production.  If the purpose of a panto is to keep children entertained for a couple of hours while also making sure that parents don’t get bored, then this is panto at its very best.

Megan Cassidy and David Glynn-Crowley are wholesomely spot on as Snow White and Prince Valiant, while Sharon Clancy is melodramatically terrifying as the Evil Queen.  The comic turns are provided by the brilliant Rose Henderson and David Latham as Wanda and Wally who sing dance and crack jokes throughout the entire performance.  The Seven Dwarfs really come into their own with a stunning setpiece called Dwarfversity.

Backed up by a large ensemble cast, great costumes and a fantastic set, the Gaiety has nailed it again, and a production like this could easily hold its head high in London’s West End.

The Gaiety Theatre’s Christmas panto offering is a cracker this festive season. It is a classy looking production..  The pyrotechnics and lighting are used to good effect, and the sets are elaborate and change frequently keeping the attention of the kids, and the cast certainly catered to their target audience.  The children booed, they clapped and they sang to their hearts’ content.

Much of the huour came courtesy of two cast members and the script had flourishes that were right up to the minute.  David Latham, who played the role of Wally did a mean Nidge from Love/Hate and Rose Henderson who played Wanda the queen’s beautician also had some of the best lines.

The theatre has hosted the annual Christmas pantomime each year since 1873.  Its something of an annual pilgrimage for many families, both Dublin and nationwide.  And there’s a really good reason for that – its a fun two and a half hours.  So if you get the chance, go and enjoy.