Isabelle and I spent a very pleasant afternoon in TV3 chatting to Lucy and Martin about our forthcoming tour of Weighing In.  This show has done 14 weeks this year already in the Mill Theatre, the Civic, the Viking, and the Axis.  Our next outing is just before Christmas at the Mermaid in Bray on 17 and 18 December at 8pm.

Late Lunch Live dug out photos of Grabbit from Pajo’s Junkbox, Sister Assumpta from Father Ted gorging on chocolate and Isabelle with the cast of Glenroe.  Adrian cooked us some rather tasty chicken with a leek and onion dressing, and I’m afraid I spurned his hot chocolate and chilli drink.  Can’t win em all!  See the Weighing In Facebook page for details of tour dates.  Theatres include, Bewleys, the new Dolmen Theatre in Cabinteely, the Everyman in Cork, Droichead Arts Centre Co. Meath, Glor Co. Clare, Dunamaise Co Laoise, Galway Town Hall and the Ramor Theatre Co. Cavan. 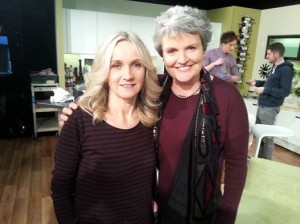 Isabelle and Rose on the set of Late Lunch Live