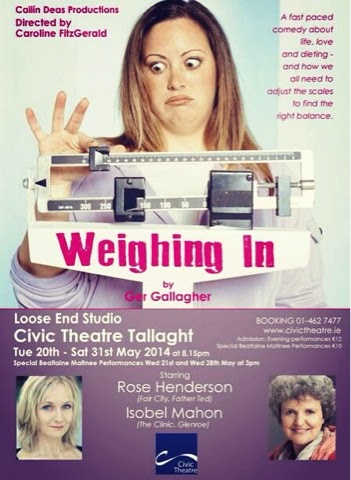 The Easi-Slim diet clinic in Clones town hall has just signed up a new member.  Upwardly mobile Pam McGowan (Isobel Mahon) has cruised into town in her soft top sports car.  Pam has reached her target weight and has only signed up to maintain and brag about the four stone she’s lost.  Breda (Rose Henderson) has been attending meetings for quite some time but just can’t manage to reduce her waistline until Pam comes along and whips her into shape.

Breda becomes a disciple of the high-priestess of low carbs and is bowled over by just how fabulous Pam really is.  The jet-set lifestyle, perfect family and of course low calorie intake all point to the fact that Pam has a life every woman strives for.  However, when Pam’s mask begins to slip, Breda is reminded that things aren’t always how they appear. 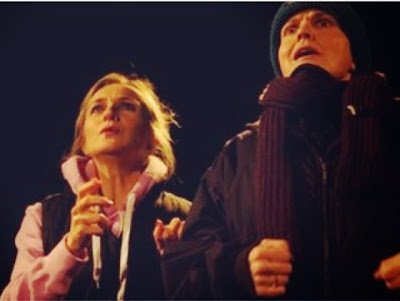 It’s a pity every lunchtime show is not as infectiously enjoyable as Weighing In (Mill Theatre, Dundrum until June 14) **** a delightful look at hysteria of the weight-loss industry.

Isobel Mahon gives a superb comic performance to bring the manically obsessive Pam alive, while Rose Henderson’s Breda is a great foil, with her enthusiastic but more balanced approach, and finally shows the advantage of never losing the human touch.

This two hander lets Rose Henderson (Breda) and Isobel Mahon (Pam) give a quality comedy turn, both looking relaxed and at ease playing against each other, and looking like they are having a fun time as well. Henderson’s stretching exercises moment is a wonderful example of physical, expressive comedy that by itself drew big laughs.

This is an entertaining piece, that will leave a smile on your face, particularly if you have ever gone to any of these meetings, as you decide what to do for the rest of your evening, if not the thought that you have seen something totally new and different.

Get yourself to the Civic Theatre in Tallaght to see ‘Weighing in’… A very funny play about the weekly weigh ins we’ve all experienced be it Weight Watchers or Slimming World or Unislim… It’s about an unlikely friendship that develops between two class members at ‘Easi-Slim’ …
I went with a really good friend and everything we had talked about an hour before the play at dinner …. was pretty much played back to us verbatim… Priceless!!! and if you can’t laugh at yourself all hope is lost!
It’s just over an hour long and you will laugh for most of it… and for the rest of it has that feel good factor that you get from a good friend who understands you… It’s a charming story about friendship and camaraderie… It’s about how people from all walks of life bond over syns and propoints… and it’s very very funny…
Big fat thumbs up from me but be quick it was a sell out in Dundrum the first time and the first few nights in Tallaght are sold out already!!!

Weighting in is a fast-paced comedy about life, love and dieting and how we all need to adjust the scales to find the right balance.