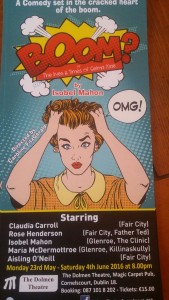 Selma Mae (Isobel Mahon) is riding the boom, or so it appears to friends and family. She has a perfect husband, perfect kids, a perfect home.
But, when her social-climbing Mother, Carmel (Maria McDermottroe), ‘helpfully’ organises a bash to celebrate her new state-of-the-art extension, Selma begins to wonder who’s life she’s living after all. As the odd assortment of guests; glamorous neighbour Chloe (Claudia Carroll), career-girl sister Maeve (now played by Clelia Murphy), and the eccentric Bernie (Rose Henderson), begin to assemble, it becomes obvious that Carmel’s dream of an elegant ‘do’ is fast descending into chaos.
The night unfolds, old secrets are shared and facades begin to crack. The Boomtime girls are forced to recognise that behind the gloss, true friendship proves the only solid foundation. 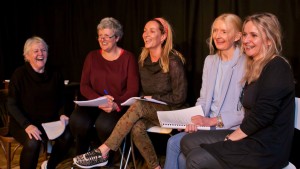 It’s a comedy that’s light and fun, but which packs a razor-sharp edge, says Emer O’Kelly

Isobel Mahon’s Boom? is set 10 years ago, at the height of (you’ve guessed it) the mythical economic boom.  Yet it could as readily be contemporary, and that’s in its favour.  She is setting out to satirise the pretentious vulgarity of suburbia, specifically areas of south County Dublin in 2006, but both her characters and the situation are as much of today as a decade ago.

Forty-something Selma Mae’s husband has walked out on her, plunging her into a nervous breakdown, an abortive attempt to slash her wrists, and a successful attempt at wrecking her brand new kitchen.  Now she’s out of hospital and having a drinks party to “celebrate” her return to normality.

But with a mother like Carmel, obsessed with appearances, that’s not going to be easy.  And then there’s Chloe from down the road, mistress of all things trendy, and the possessor (in her own mind) of the solutions to everyone’s problems.  Add in Selma Mae’s older sister Maeve, ahead of her in the separation stakes, cynical and with a tongue like a razor, and you have a lethal mix even before you add in Bernie – the obsessive compulsive neurotic who Selma has met in hospital, but who is definitely not the class of person Carmel wants her daughter to be associating with.

This production at the Dolmen Theatre in Cabinteely in Dublin is as light as a feather, thanks to Mahon’s sure ear for dialogue.  But she also has a good touch with reality checks, and there’s a real sense of empathy with the trials of modern life, even when cushioned by designer takeaways for parties, golf club membership and the latest mod-con gadgetry.

Director Caroline FitzGerald has assembled a first-class cast and handles them with a deft touch.  The author herself plays Selma, with Maria McDermottroe as Carmel, Claudia Carroll as Chloe, Aisling O’Neill as Maeve, and Rose Henderson as Bernie.

All are terrific, but O’Neill does slightly edge the lead as the unapologetically vicious Maeve.

Design is by Conor Neville with lighting by Ben Downey.

Michael Moffatt show of the week

WHAT REMAINS WHEN THE GLITTER FADES…

Isobel Mahon’s play comes as a follow-up to that day of wrath in the Abbey last year when the Waking the Feminist movement took over the theatre for a day to bemoan the sad lot of women in the theatrical world.  So to balance things, here’s a play written by a woman for herself and four other women, about women’s problems, directed by Caroline Fitzgerald.

The theme of family difficulties is certainly up-to-date but there’s a problem balancing the comic and serious elements of the story, whether to go for breezy comedy or for a satirical look at the pretentious and flamboyant lifestyles of the Celtic Tiger boomers.

Selma Mae, married to an architect, with a nice home sweet kids, and a new super house extension to show off, has some friends and relations over to celebrate.  There’s one snag – not everyone knows that she recently spent time in a psychiatric hospital.  Why that happened is central to the story.

When her pushy mother takes over the job of managing the evening, and the friends turn up, cracks appear in the apparently glittering lifestyles, secrets are uncovered, and celebration declines into disintegration.

The comic element needs a sophisticated touch to keep the serious aspects in focus, but often, especially in the case of the mother, Carmel (Maria McDermottroe) an ignorant interfering monster, the comedy comes across as having all the delicacy of a sledgehammer wielded by a pantomime dame.

Which is a pity because, in general, the characters and the situation are full of possibilities,

Aisling O’Neill as Maeve, the embittered sister with a waspish tongue is a credible creation, the sort who can bring a sharper comic edge to a serious role.  She’s well contrasted with the fashion-conscious, allergic-to-everything Chloe (Claudia Carroll) full of psychobabble and instant empathy, but not quite as gormless as she appears.  Maeve’s big dramatic bust-up with Chloe is one of the play’s stronger scenes.

Bernie, Selma’s former psychiatric inmate pal, very nicely played by Rose Henderson, is a genuinely interesting character, but she’s lumbered with rather obvious neurotic tics and traits spelling out everything.  Isobel Mahon’s own role as the doleful Selma is all the better for being understated.

There’s potential here for the exposure of shallow lives and shattered dreams, and some crisper editing and firmer direction might sharpen the comic elements.  But nonetheless, the audience clearly enjoyed itself.